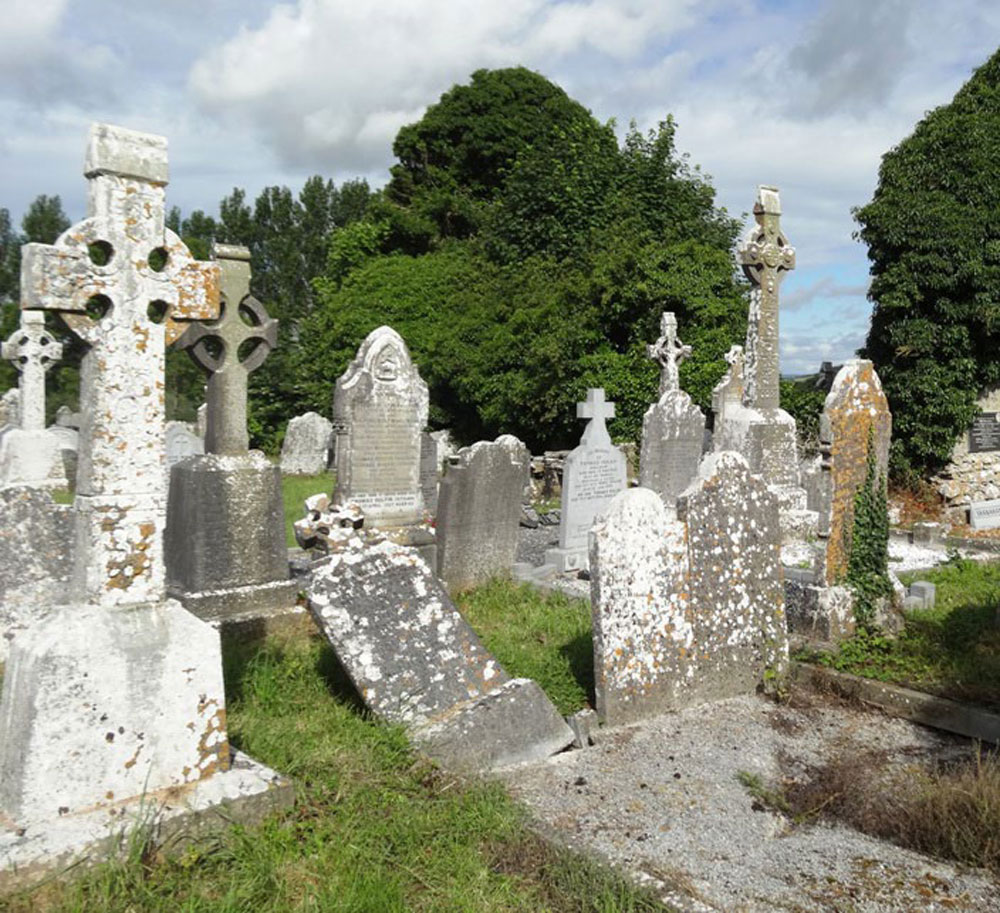 Location: Ballinure is situated in the west of Slieveardagh on a strip of the northern lowlands between the hills and Littleton bog 3.7km west of Graystown and 9.5km north east of Cashel (Middlethird Barony). Ballinure church is sited at an altitude of approximately 135 metres on ground sloping gently to the north. The church is adjacent to the main road to Cashel called Barnafacurny in the Civil Survey (Civil Survey I , 118). 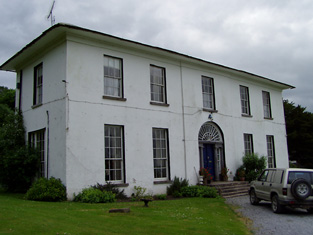 Description: Ballinure church was dedicated to St. Matthew (Hassett & Fitzgerald 1990, 37). The church is constructed of roughly dressed uncoursed limestone and measures 18.3 metres with a surviving width of 7.1 metres (Fig. 36). The church has a ratio of length to width of 2.6: I. The gables and most of the south wall survive, although the north wall has been totally removed (Plate 4). A vaulted tomb has been inserted into the western end of the church and measures internally 3.5 metres by 5.9 metres.. The south wall survives to a height of 1.5-2 metres. One window remains in the east gable with a splayed double light but is missing its mullion. Some of the stones beneath the east window project slightly from the wall possibly representing the line of the original altar. The west gable has a steep pitch. However, most features are obscured beneath a thick covering of ivy. There appears to be a bellcote on top of the west gable just visible beneath the ivy . The west gable has a base batter; there is no batter on the east gable, although it may be hidden beneath a build up of soil. The tomb vault was built within the church against the west gable and is constructed of roughly coursed limestone with an entrance on the east side. Internally the tomb has a barrel vault and some corbels set into the wall. It was built by the Taylor family, the local landlords living at Noan House, after the church became a ruin. Graves have also been dug in the interior of the church. Nothing remains of the original entrance which was probably in the northern wall The graves in the graveyard are placed right up against the church and date from the late-seventeenth century to the modem day.

Location: Ballinure is situated in the west of Slieveardagh in lowlands between the hills and bogs 3.7 kIn west of Graystown (28) and 9.5 kIn north-east of Cashel. The settlement was sited at an altitude of approximately 135 metres, on ground sloping gently to the north. Ballinure is on a cross-roads, with the main road through Slieveardagh towards Cashel running east-west runs through the settlement (Fig. 26).

History: There appears to have been a borough in Ballinure in the later medieval period; in 1521 a deed mentions the granting of messuages, lands and tenements in the burgage of Bally Innyvir (Ballinure)(Orm. Deeds IV, 71; Bradley 1985, 56). In 1654 the Civil Survey described the settlement in the townland of Ballinure as inhabited & hath thereupon some few cabins without any other impvemt (Civil Survey I, 118). The Down Survey depicts a church in the centre of Ballinure, with three cabins and a glebe field to the north (Fig. 29). In 1659 Ballinure townland had an adult population of 32 people (Pender 1939,296); in 1666/7 it had six houses, all with single hearths (Laffan 1911, 135).

Description: The only upstanding remains of a medieval settlement at Ballinure is the ruins of a late medieval church (6) (Fig. 36). Ballinure today is a collection of houses at a cross-roads. There is no evidence that Ballinure was a significant nucleated settlement in the medieval period. The Earl of Ormond possessed the townland in the later medieval period and he may have given the borough status as an attempt to develop the site.

Comment: The settlement of Ballinure consisted of a parish church, possibly with houses at the cross-roads but not in a significant nucleation or village. Ballinure appears to have been a Borough in name only.

In 1666 Nathaniel Taylor, an officer in Cromwell’s army, was ganted an estate of approximately 1,000 acres in the barony of Slievardagh, county Tipperary, including the townland of Noan. His grandson Lovelace Taylor purchased Ballinure in 1742. Lovelace’s son Godfrey Taylor of Noan, county Tipperary, married as his second wife Lydia, daughter and heir of Nicholas Bacon in 1758. Edward Taylor of Noan, barony of Slievardagh, county Tipperary, married Elizabeth Hewetson of Kilkenny and had three sons who all died childless and a daughter Anne. Edward died in 1802 and was succeeded by his son Nathaniel who died in 1828. His daughter Anne married in 1819 John Bagwell of Kilmore and the Bagwell family were in possession of this estate by the mid 19th century. It was sold to Stanley Black in 1853.

A younger brother of Edward, Nathanial Taylor inherited Ballinure, a townland bordering Noan, but without a residence. Godfrey L. Taylor of Durrow, Queen’s County (Laois), owned 996 acres in county Tipperary in the 1870s. In the mid 19th century the Taylor estate was in the parishes of Graystown, barony of Slievardagh, Peppardstown and Rathcool, barony of Middlethird. The estate of the trustees of the will of Godfrey Taylor at Rathkenny, barony of Middlethird, county Tipperary, was advertised for sale in May 1854.

Originally the home of the Taylor family, occupied by Natt. Taylor in 1814 and recorded by Lewis as the seat of the Taylor family. By the mid 19th century it was occupied by the representatives of John Bagwell and held in fee. The buildings were valued at almost £30. The sale rental of 1853 records James Chadwick as tenant on a 7 year lease. A lithograph of the house is included. Occupied by Dr Armitage in the 1870s who owned over 2,000 acres in the county.

Dr Armitage of Noan, Ballinure, Thurles, county Tipperary owned 2,019 acres in county Tipperary in the 1870s. “Burke’s Irish Family Records” refers to Thomas Rhodes Armitage MD of Cambridge Square, London and of Noan. In 1860 he married Harriet, only daughter and heiress of Stanley Black of Noan, and they had a number of children including Alice, founder of the National Council for the Blind of Ireland. Members of this family were still living at Noan in the 1970s.

Fitzgerald and Hassett state that the Noan estate of the Taylor family was sold to Stanley Black in 1853. Lyons records that he paid £20,300 for it. Black’s only daughter and heiress Harriet maried in 1860 Dr Thomas R. Armitage and the Noan estate passed to the Armitage family, who were still resident in the mid 20th century.