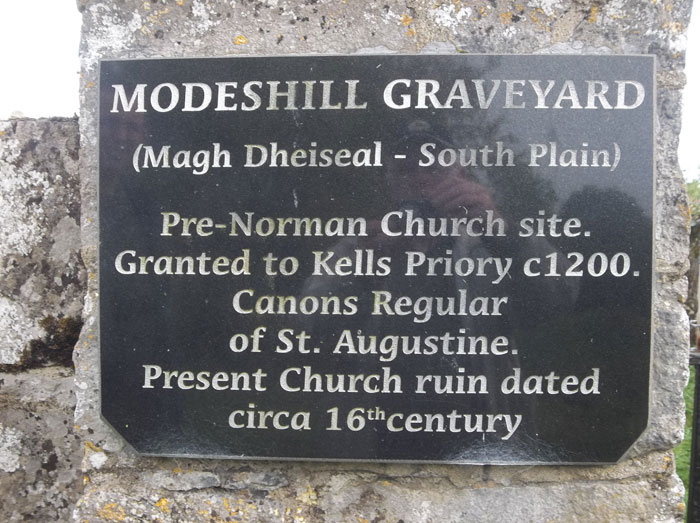 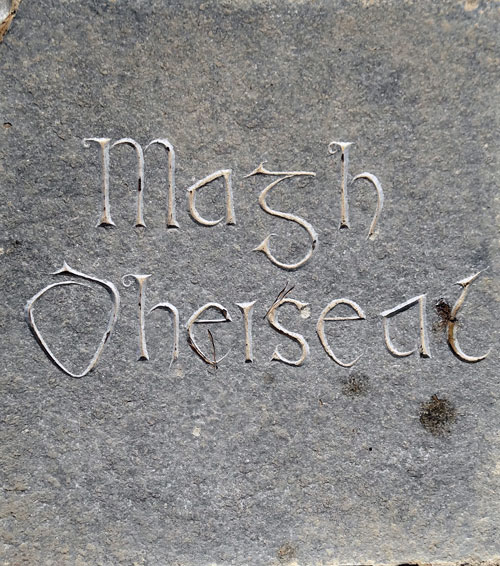 This rectangular church (dims. 27.4m E-W; 6.6m N-S) is constructed of roughly coursed limestone rubble (wall T varies from 0.83m at E gable; 1.2m at W gable; 0.8m at N and 0.9m at S). The walls are densely ivy clad both internally and externally. The church has a round-headed doorway towards the W end of the S wall, which is chamfered externally with diagonal stops and has a draw-bar hole and receiver internally. According to the OS Letters (O’Flanagan 1930, vol. 1, 73) there were two doorways, ‘the one on the north side was at the distance of sixteen feet [4.87m] from the west gable, but this is now reduced to a formless breach in the wall’.

Whether there was a doorway in the N wall is unclear as the breach has been crudely filled with masonry and is now also obscured by ivy. The N wall has a breach (Wth 3.25m) at the W gable and where the doorway may have been located there is rubble in the interior and the wall (for a length of 7-8m) is lower (H . 1.4m) at this point than the remaining upstanding wall (H c. 2.7m). There is a flat-headed window at the E end of the N wall. The apex of the E gable has fallen and forms a pile in the interior below the sill of the E window. The lower jambs and sill of a formerly glazed two-light E window with external chamfer remain in situ, though the head, which has been described as ‘quadrangular’ or flat-headed in the OS Letters (O’Flanagan 1930, vol. 1, 72), is missing. The S wall (H 2.7m) has a flat-headed window (Wth 1.17m) at the E end and a similar window E of centre, there is also a much smaller flat-headed window near the W gable.

The W gable survives to full height (c. 10m) surmounted by a bellcote which contained two bell openings, though only the northern one survives. The internal face of the W gable appears to have been rebuilt as it is not keyed into the S wall (the NW angle is obscured by ivy). There is a small, flat-headed window in the gable. The interior is scattered with modern headstones and low, uninscribed grave-markers. A rectangular structure (dims. 10m E-W; c. 6m N-S) adjoins the church, off-centre to E on the N side. It is defined by the remains of a low, sod-covered wall (Wth at top 0.5m; total Wth 1.75m; int. H 0.95m; ext. H 1.3m) with a sunken interior. According to local tradition this is a famine burial plot. The earliest headstone, Cody 1770, is within the church, indicating that church was probably roofless and ruined by the mid-1700s at the latest.