Extraordinary Story Of a Famine Refugee, who Became a Papal Marquis

There died on May 8th, 1929 at the age of 82 years, a man who in his early boyhood was a refugee from the famine in Ireland but who through hard work and ability got on well in the United States and devoted huge sums for church building and repairs all over the world.

Born in Lisnamrock, Ballingarry, Thurles, in “black 1847” Martin Maloney was brought by his parents to Scranton, Pennyslvania, in 1854. He was named a Papal Marquis by Leo XIII and a Papal Chamberlain by St. Pius X (1904)

As a result of anti-clerical legislation in France in 1901, most religious orders and congregations saw their property confiscated. But behind the scenes a whisper, a rumour began to grow. A wealthy American was buying up much of the religious orders property to preserve it for a time when Catholic France, the ‘eldest Daughter of the Church” would return to reason. The name of the American was Martin Maloney and he took title to a number of convent and religious institutions in order to preserve them from confiscation.

Born During The Famine

Born in Ballingarry, Thurles, on December 11, 1847, Martin was brought by his parents, famine refugees, to Scranton, Pennsylvania, in 1854. His parents had arrived in 1848 but were not able financially to bring their son to the U.S. until then.

Young Martin worked in the mines, as a clerk in a grocery store and as an apprentice to a metal worker. With little schooling, but much experience, he established a grocery store that failed and later a plumbing business. In the plumbing trade he obtained some patents from which he improved a gasoline burner which became widely used in street lighting.

When he moved to Philadelphia at the age of 26, Martin was already on the way to success. He obtained contracts for lighting the grounds of the Centennial Exposition and for the street lighting of Philadelphia, Pittsburgh, Camden and Jersey City. In 1880 he organised the Pennsylvania Globe Gas Light Company. He later became associated as an organiser and owner of several public utility firms which culminated in the Electric Company of America. 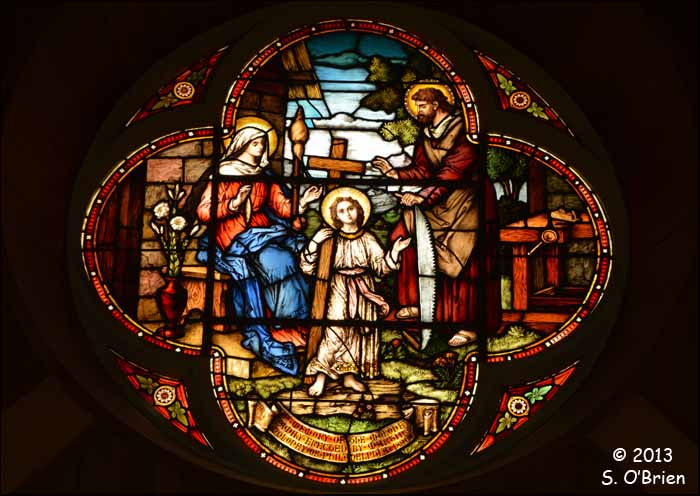 Martin fervently supported the Catholic Church Extension Society. Through this mission headquarters he constructed chapels in Rock Hill and Florence, South Carolina and Rome, Georgia. Many hospitals and charities received donations that were never recorded. He provided for St. Martin’s chapel at the seminary of St. Charles Vorremeo, Ovedbrook Pa, for the beautiful Italian Renaissance St, Catherine’s Church at his summer home in Springlake, N.J., as a memorial to a daughter who died at sea; The Martin Maloney Home for the aged in Scranton and the elaborate Maloney Chemical Laboratory at the Catholic University of American in Washington D.C.

In Rome he paid for repairing the ancient Basilica of St. John Lateran, the Pope’s Cathedral. Named a Papal Marquis by Leo XIII and a Papal Chamberlain by Pius X (1904) he was interred after his death (May 8, 1929) in the crypt of the memorial church at Spring Lake.

The Old Home – And The New

The old home  in Lisnamrock where Martin Maloney was born no longer stands, tho’ it location is known. Cousins included, Mrs Mike Hogan, Johanna and Mike Maloney, now deceased. The Phelan family, Gortnahoe village and the Brophy family, The Commons are amongst his relatives in Co. Tipperary, Many are now are gone to their eternal reward. His summer residence at Spring Lake, New Jersey is a beautiful white mansion, patterned on the White House at Washington D.C. On the entrance gates to his home in Scranton, Pennsylvania, is inscribed the name “Ballingarry.” (appreciation to Dr. Willie Nolan 19/12/2012).