A stitch in time: the Stokes Tapestry 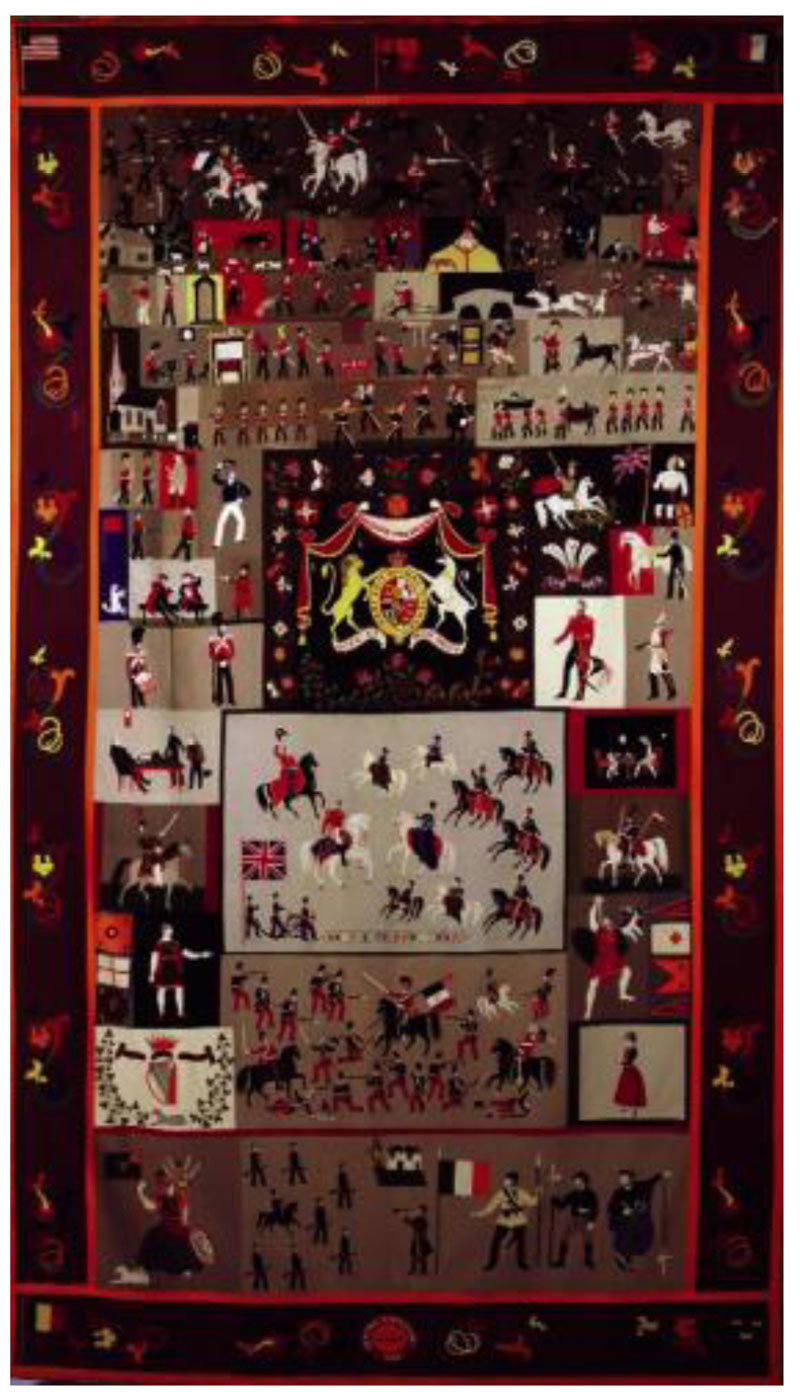 (Panel 1, at the bottom of the tapestry—‘The Irish Constabulary and the Boys of Ballingarry’— representing the 1848 rebellion of the Young Irelanders in County Tipperary, is remarkable for the early pictorial representation of the Irish tricolour. Note that the rebels are depicted on a larger, more dashing scale than the police (National Museum of Ireland)

On display in the ‘Soldiers and Chiefs’ exhibition in the National Museum at Collins Barracks is a large table-cover, measuring 8ft by 4ft, called the Stokes Tapestry.

This large pictorial work featuring 250 figures was made by Stephen Stokes between 1833 and 1853 and illustrates his experiences in the British Army in Ireland and subsequently in the Dublin Metropolitan Police, historical events during his lifetime, and popular personalities and characters of the early Victorian period. The scenes or episodes depicted are arranged in 31 panels, which vary widely from the depiction of ‘Enlisting for a Soldier’ to that of the ‘Swedish Nightingale’ Jenny Lind, a famous opera singer of the day who performed at the Theatre Royal in Dublin in 1847. At the centre of the tapestry he shows Queen Victoria and Prince Albert reviewing the troops, the Royal Coat of Arms and the capture of a French Eagle standard at the Battle of Waterloo in 1815 by the 1st Royal Dragoons.

Several of the panels relate specifically to Ireland, notably scenes of Donnybrook Fair, a notoriously rowdy annual event that became synonymous with riotous behaviour, and a representation of Hibernia holding a cornucopia, symbolising ‘Prosperity to Ireland’. ‘The Irish Constabulary and the Boys of Ballingarry’, representing the 1848 rebellion of the Young Irelanders in County Tipperary, is remarkable for the early pictorial representation of the Irish tricolour, and it is interesting to note that the rebels are depicted on a larger, more dashing scale than the police.

The top part of the work is more densely packed with small panels than the more generously spaced larger panels lower down. The fact that some of the scenes depicted in these lower panels date from the late 1840s would strongly suggest that the table-cover was worked from the top down. The army uniforms are not historically accurate but date from the 1840s, when Stokes was making the tapestry. The border of the tapestry, which may have been added at a later date, has the words ‘National Exhibition—S.Stokes—1853’ in a circular panel at the bottom.

Stephen Stokes was born in Plymouth in 1802 and enrolled in the army as a boy with the 2nd Royal Veteran Battalion, who were garrisoned on the island of Madeira. The regiment disbanded in 1815 and returned to Britain. In 1819 Stokes entered the 63rd Regiment of the regular army, then stationed in Ireland, transferring to the 1st Royal Dragoons in 1826 when the 63rd were sent to Portugal. At this stage of his career it would appear that Stokes was keen to stay in Ireland. On leaving the army in 1836 he joined the newly formed Dublin Metropolitan Police, initially as a sergeant but rising to become inspector of mounted police.

He retired in 1855 and was presented with a snuffbox made from the hoof of the horse ‘Waterloo’, a veteran charger from the famous battle, which Stokes is believed to have ridden on ceremonial occasions in the Phoenix Park. For the next fifteen years Stokes held the post of superintendent of the Turkish baths in Lincoln Place, retiring to the village of Dalkey in the early 1870s, where he was actively involved in the organisation of the annual local regatta. He died in 1900 at the age of 98.

The table-cover was shown to Queen Victoria during her first visit to Ireland in 1849. Described as a ‘table cloth of mosaic cloth work’, it was displayed in the ‘Tapestry, Carpets and Floor Cloths’ class at the Great Exhibition in London in 1851, and was awarded a bronze medallion and certificate. It was subsequently exhibited in the Irish Industrial Exhibition of 1853, exciting much interest and a mention in the Irish press. A privately printed pamphlet dating from 1895 indicates that it was displayed at that time, with the horse-hoof snuffbox. From this pamphlet we have a good idea of what each panel is illustrating, starting at the bottom.

Lar Joye (military history) and Alex Ward (textiles) are curators at the National Museum of Ireland.