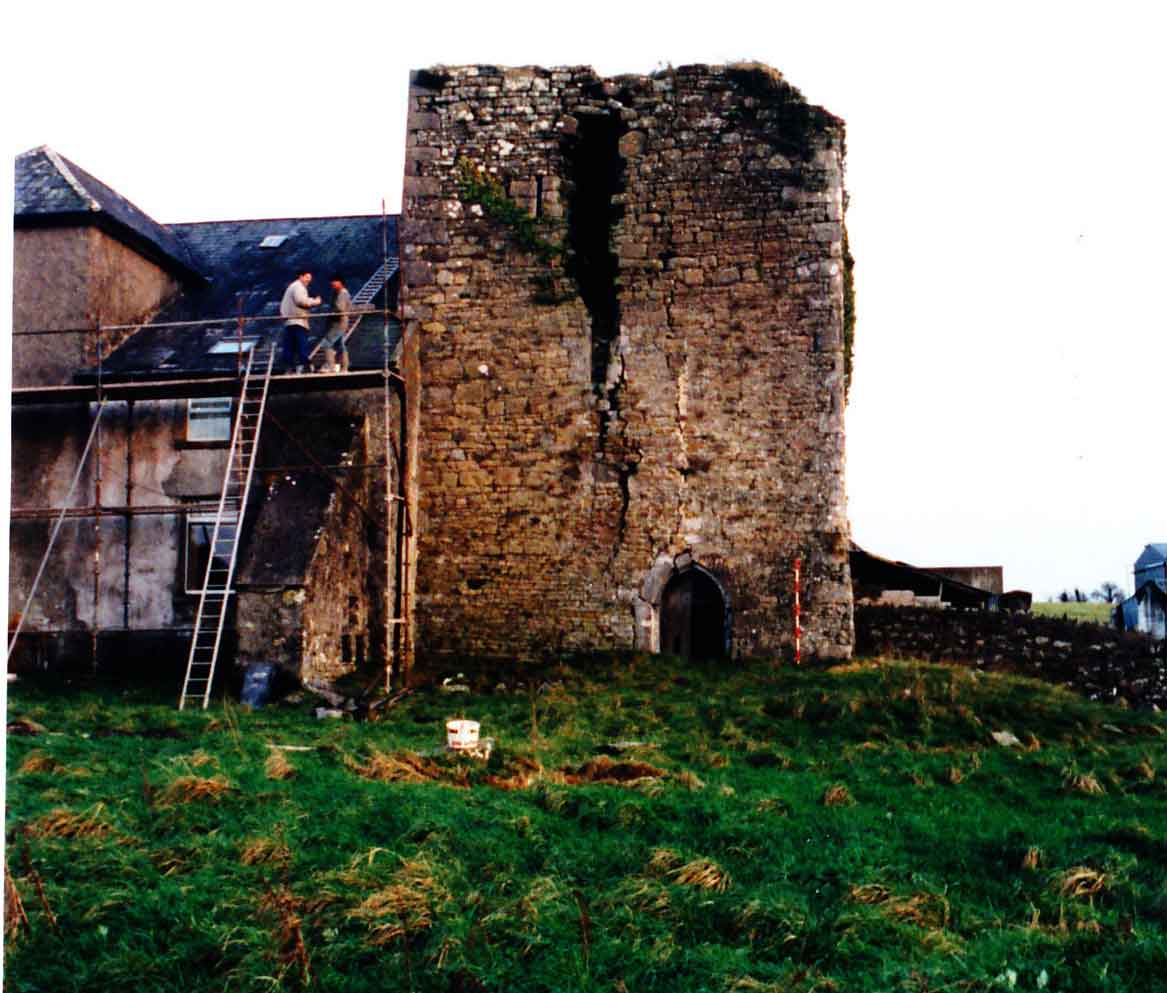 In 1666 Daniel Gahan and his wife Susanna, widow of Thomas Ashe, were granted of about 1,000 Irish acres in the barony of Slievardagh, county Tipperary, including Coolequill. O’Hart records three sons of this marriage, Sir Daniel, George and John. Sir Daniel had no children and was succeeded by George. George’s grandson, Daniel of Coolquill Castle, parish of Crohane, barony of Slievardagh, married Hannah Bunbury of Kilfeakle, co heiress of her uncle, Matthew Bunbury. In 1793 their daughter Marianne married William Tighe of Woodstock, county Kilkenny. Daniel Gahan was a Member of the Irish House of Commons in 1797. He had no sons and O’Hart writes that his property was inherited by his daughters Marianne Tighe and Penelope Gledstones [Gledstanes].

In 1786 Wilson refers to Coolquill as the seat of Mr. Gahan. The property is labelled “Coolquill Castle” on the 1st edition Ordnance Survey map and indicates that it was built on to a tower house. Coolquill was held in fee by Colonel Palliser in the mid 19th century. He was married to Anne Glenstanes. The castle was valued at £5. The castle ruin and other buildings are still extant at the site.

Other Castles of Crohane.
About 1/2 a furlong to the east of the graveyard there is another castle round on the inside and square outside but only the south and east sides of it now remain. It was 21 ‘6’ in diameter on the inside. The walls were 9’ thick and what remains are 20’ high.

In the middle of a green filed almost a furlong to the east of the castle in Coolnacullia there is a moat measuring 50 yards in circumference at the base, and about 16 feet in perpendicular height. (Rath an Afrainn in Ballykerrin)

In Crohane-graveyard at the Protestant church built before 1883, there are a couple of old tombstones, one to Lieut. Humphrey Minchin of Shangarry, now Wilford, who was one of Cromwell’s officers and ancestor of all the families of that name in Tipperary. The other is to one of the Millets-also a Cromwellian family.

Location: Coolquill townland is situated in the south of the barony in the folds of a small river valley (Fig. 32). The land is predominantly used for pasture today with an adjacent large fIeld called the Deer Park recently planted in forestry. The land was judged to be duel purpose in 1654 with a significant (20%) amount of bog. The bog was the marshy ground around the river. Coolquill is situated 3.2km west by north west of Crohane (19) and 2.8km east of Killenaule (37). Coolquill tower house was sited at a height of 180 metres on the eastern flank of a small river valley. The tower house is sheltered and well lit with a westerly aspect. The site bawn was adjacent to the road which connects further north with the main road (Bohir Mor) from Ballingarry (4) to Killenaule (37). The nearest water source appears to have been a spring and stream 76 metres east of the site.

Historical:  Coolquill is recorded as being in the possession of Morish Stoke in 1640. The Civil Survey records the structures in the townland as “a good castle yett wanting repayre and a bawn and a thatcht house and six cabins” . Also, a coal mine is also recorded on the townland (Civil Survey I, 130). The Down Survey only depicts three houses around a castle in Coolquill; two to the north and one to the south. Ambroses Minchin was taxed for two hearths in 1665 and 1666/7 (Laffan 1911, 34, 138). Michin may have been resident in the castle and its adjoining house.

Description: Coolquil castle consists of a four storey tower house type constructed of coursed red shale flagstone and limestone measuring externally 7.15 metres. by 8.9 metres. The tower house has dressed limestone quoins with a base batter. A large farm house is attached to the north side of the tower house. This house is apparently seventeenth century in date and is still lived in (Fig. 43, Plate 16). Coolquill tower house is a square structure rising to four stories and with a prominent structural crack down its west facade to first floor level. The upper floor was removed several decades ago for safety reasons. The interior has two vaults: on the first and third floor. The upper floor as accessed by a continues flight of stairs from the west and north walls to a vice which rose to the third floor. The original main entrance is through a segmented pointed arch door on the west wall which had been fitted with a yett. The ground floor is divided into an entrance lobby and the main ground floor chamber. The entrance lobby was separated from the stairs and the ground floor chamber by inward opening doors. The chain opening the yett gate was accessed from behind this door. The lobby also had a murder hole in the ceiling from the first floor.

The main ground floor chamber has a vaulted ceiling and was lit by one splayed slit window set in a deep embrasure in the east wall. There was also been another window in the north wall which was obscured when the seventeenth century house was built. The owner of the house said a blocked arch had connected the living room to the tower house presumably through this embrasure. The vault has partially collapsed leaving a gaping hole to first floor level.

The first floor is accessed directly off the mural stairs through a pointed-arch door. The stairs were lit by slit windows which have subsequently been blocked. The first floor chamber was well lit by two large windows on the south wall and one narrow light on the west wall. The first floor had a garderobe at the end of a passage in the east wall and a wall recesses in the north-west corner. The murder hole was incorporated into the embrasure of the west window. The large crack in the west wall admits additional light.

The garderobe passage is lit by two narrow windows and telminates after a turn in a seat created out of an upright flag stone. The second floor was supported on corbels and wooden wall plates and had a vaulted ceiling. The chamber was entered through a square-headed door in the south-west corner of the room and was lit by two narrow windows set in embrasures; one on the west and the other on the north wall. The northern light has been split by the structural crack.

A mural passage in the east wall of the second floor at the top of the stairs leads to what appears to be another garderobe. The passage had an inward opening door and was lit by two slit windows. The end of the passage has collapsed which obscures any garderobe seat or aperture.

The third floor was removed several decades ago because the owners felt it was in danger of collapsing. The floor was supported on a vault and reached by a short vice at the top of the mural stairs. The steps have been removed and the third floor is now inaccessible. A chimney was inserted in the north wall of the tower house when the seventeenth century house was built and is still in use. There is no evidence of internal fire places in the tower at least in the first three stories. Coolquill tower house was surrounded by a bawn. The original walls have been incorporated into the farm yard out houses. The wall facing the road does not appear to be the original bawn wall. Two ogee-headed windows with spandrels have been inserted into one of these out houses in the front farm yard. The seventeenth century house is still lived in. However, the interior was inaccessible at the time of the survey due to renovation work in progress.