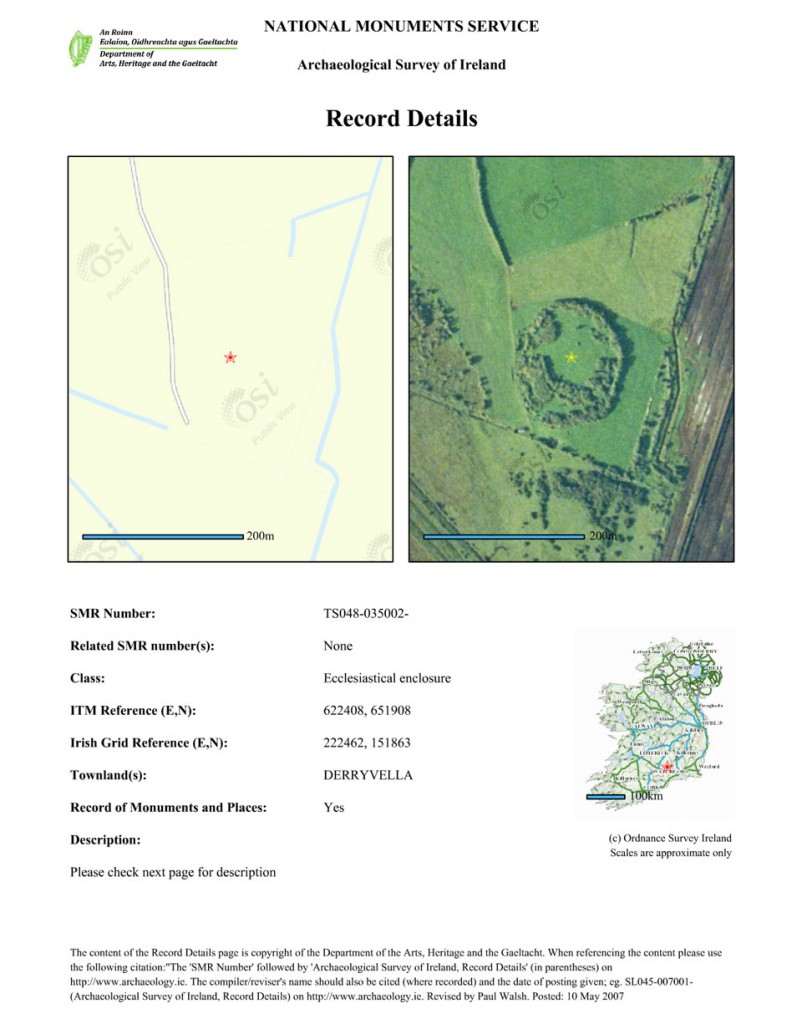 In grassland atop a natural rise of ground surrounded on three sides by Derryvella Bog, with good views in all directions. According to Gwynn and Hadcock this was the site of the early Christian monastery Daire Mør which was associated with Bishop Colman, however, recent research has identified the church at Longfordpass North in North Tipperary with Daire Mør and not Derryvella as once speculated (Manning 1997). O’Donovan associated the monastery with Doire Meille founded by St Tigernach whose feast day was on the 4th November and was regarded as the second oldest churchyard in Ireland and one which the pope is obliged to mention once a year (O’Flanagan 1930, vol.1, 159). This monument is heavily overgrown with sloe a thorn bushes, though the morphological features are visible on an aerial photograph taken in the 1960s (CUCAP 1965, ALV 63; 1966APA29).

An ecclesiastical enclosure consisting of a large circular enclosure (diam. 150m N-S; 125m E-W) defined by an earth and stone bank (base Wth 4m; top Wth 1.5m; int. H0.2-6m; ext. H 1.7-0.8m) and shallow external fosse (Wth 2m; extD 0.1m) with possible entrance feature (Wth. 5m) at the W. Off-centre within this large enclosure is a somewhat smaller circular area (100m N-S x 125m E-W) defined by a scarp (H 1m) located immediately SE of church (TS048-035001-) and is visible SE through S to W only, at the W it runs onto an outer enclosing feature where there is a possible entrance gap (Wth 5m). This scarp is located 30m to the N of the enclosing feature and the church is located 40m to the N of the outer enclosing bank. Enclosing the scarp there is evidence of an inner fosse (base Wth 3m; top Wth 7m; ext. D 1.7m) and external bank (Wth 6m) visible from SW to W which is different from the enclosing element elsewhere on the monument, the presence of an inner fosse may suggest a prehistoric origin for this evidence