The Cistercian Abbey of Kilcooly is a hidden jewel dating from the 12th century although the present building was constructed in the 15th century. It contains many interesting carvings including the 12 apostles, a Dolphin, a mermaid, etc. The monastery is the burial place of Pierce Butler, a member of the Butlers of Ormond family. The beautiful ruin is set in a dramatic Woodland and lake setting in the private and walled Kilcooly estate.

The Buildings of Kilcooley Abbey.

The first thing is to get over the stile constructed by the Office of Public Works. The ascent and descent of the stile is tricky and adventurous. Over the stile stand with your back to it and you are struck by the compactness of the Abbey buildings. The Abbey was founded about 1200 A.D. by Donal O’Brien, King of Munster. Jerpoint Abbey, near Thomastown, was its mother-house.

As you approach the Abbey you cannot fail to notice a round building to your left. This is a columbarium or pigeon house or dove- cote. The round wall is thick and tapers towards the top, ending in a three-foot wide opening through which the pigeons entered. There were scores of pigeon-holes around the inside of the wall in which the birds roosted at night.

I surmise that, as the monks did not eat flesh. the pigeon-meat was used for the sick in the hospital. the building to the left of the Abbey.

You come to the Abbey Church. Again you are intrigued by the stile that admits you through the iron gate. The porch to which it leads was built about 1450, after the Abbey had been destroyed by fire. The porch is on the north side, unusual in an old church which was always entered by the west door. The porch is elaborate having a fine grained roof. It has a baptismal font with rather modern ornamentation which tells us that Kilcooley was a parish as well as housing the monastery. The porch particularly was used in the shooting of the film “Catholics” .based on the book written by Brian Moore, in about 1972.

Stand under the bell-tower of the church and look towards the high altar. There is a marvellous Gothic window. It is in the Flamboyant style and the window opes give a wonderful idea of flames rising.

Over your head are the holes through which descended the ropes which rang the bells of the Abbey. About 1890 Thomas Morris. while digging a grave in Boulick near the bell-tower, found two bells one cast before 1250, the other, with a better tone, cast later. The bells now hang in Holycross Abbey. I sunnise they once may have hung in Kilcooley Abbey.

To your left, set into the wall, is a gravestone depicting Abbot Pbjlip Lennon, who rebuilt the Abbey about 1450. You are struck by how little the vestments he wears have changed since then.

Nearby, is a table-tomb with a recumbent knight, excellently carved, by Rory O’Tunney, a well know sculptor or “imager”. The knight is Peter Fitzjames Og Butler who died in 1526. Alas! the fine carving is spoiled by the chiselling-off of the face and brow of the subject.

Beneath the knight’s figure are small, well-carved tablets with figures and names of the apostles -O’Tunneys work too.

On your right you see the Abbot’s chair, with grooves for the hinged, wooden seat. The seat is rather elaborate, with the Butler anns overhead. Opposite is the Prior’s seat which is rather plain.

Opposite the porch, or transept, through which you entered is the short transept which leads to the sacristy. Round the sacristy door , among others, you see a rather crude carving of Saint Christopher. There is also a plain carving of St. Benedict, founder of Western Monasticism. Surprisingly there is a well-carved figure of a mermaid with a looking-glass! Perhaps a warning against pride!

Before you leave the church, near the sacristy transept, you notice a narrow-stone stairs. This is the night-stairs which led from the monk’s dormitory.

You look down the church, which is fairly large, and you see the west door, now blocked up. 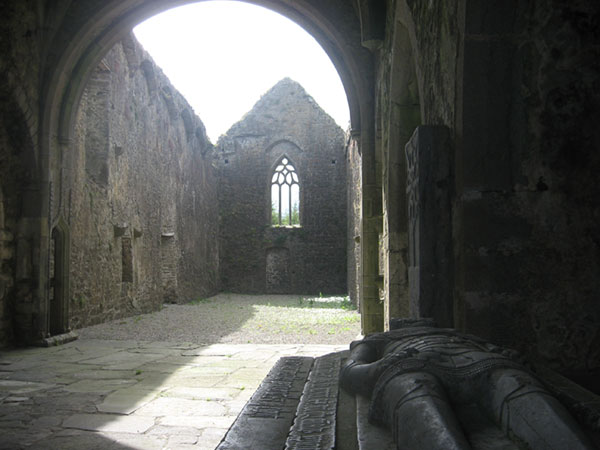 You emerge from the church into the cloister. (Cloister means enclosure, the whole complex of buildings that make up the monastery ). You must imagine that the square in whose corner you are, had an ambulatory or covered walkway running around it’s four sides. The roof was supported by corbels high up on the walls and a lower wall with arches. The walk-way put the monks, dry-shod, in touch with all parts of the abbey. In the middle was the cloister, gort or garden.

To your left, or on the eastern side, you see two chambers, not very big. The first is called the parlatorium, or parlour (from parlare-to speak). The monks observed silence but the Prior could speak and do busmess with visitors in the parlour.

The parlour has a plain doorway but the second chamber, the chapter room, has an ornate doorway. You notice the double-barred cross of the Archbishop of Cashel on the lintel. The Abbot spoke to the .assembled monks in the chapter-room -orders of the day etc. In the south west corner was the refectory or monk’s dining hall. The kitchen is off this room and you can see the large chimney. 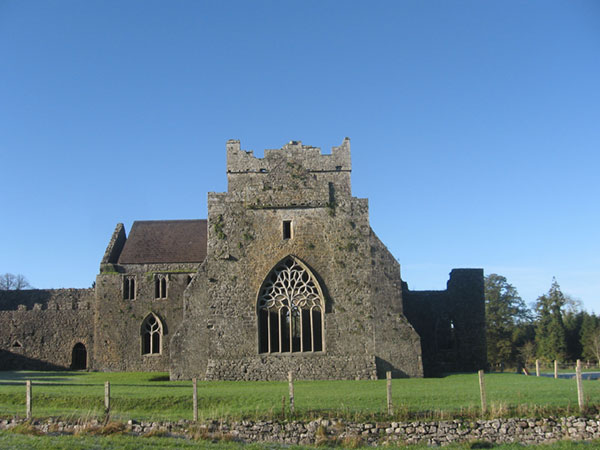 The calefactory, or warming-room, was on ground level at the end of the dormitory. It is entered from outside, not far from the guest-house, or infirmary. The monks were human! 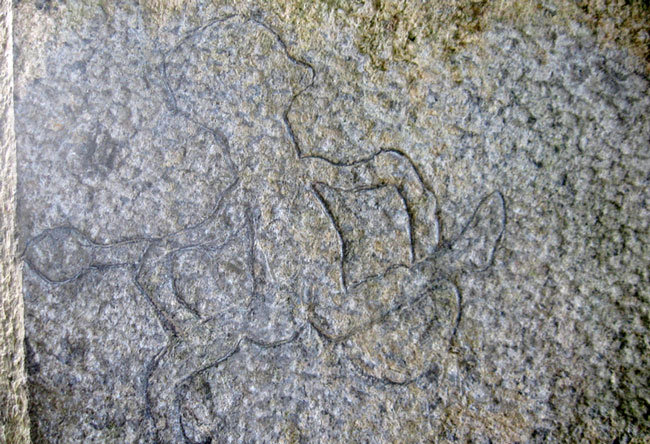 The guest-house, or infirmary, is a massively built building with very thick walls. There are two chambers on gound level. The large chamber was for visitors and there was a large fire but not too comfortable! The smaller chamber was perhaps for servants and horses. Overhead was the hospital for sick monks and sick people. The Abbey. thus, served a good social purpose.