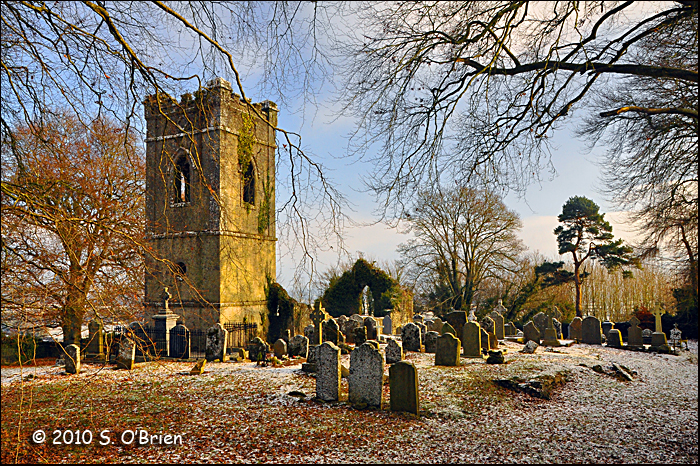 According to Butler (2006, 282) the church was in continuous use since the Reformation and was substantially remodelled or rebuilt in 1716. A rectangular church (ext. dims. 17.45m N-S; 7.65m E-W; wall T 0.75m) with a three-storey 19th-century bell-tower (ext. dims. N-S 5.05m; E-W 4.3m; wall T 1m) built onto the W end. It is located in the centre of a large rectangular graveyard which is enclosed by a high limestone wall. The E gable is composed of limestone rubble, roughly coursed with a base-batter at the NW angle. There is a later, broken-out window, in the centre of the gable. Most of the central section of the N wall has been reduced to wall-footing level and the W end appears to be 18th or 19th in date. The S wall is better preserved, though there are no features visible in either wall. 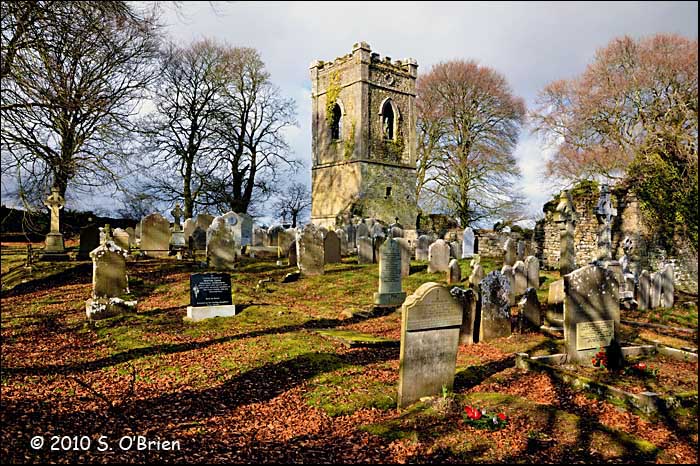 A doorway (Wth 1.15m) in the centre of the W wall gives access from the church into the bell-tower. The main pointed, cut limestone doorway of the tower (Wth 1m) is visible in the centre of the S wall of tower. A 19th-century wall memorial is inserted into the external face of the S wall off centre to the W. A large medieval waterspout has been re-erected as a memorial in the SE quadrant of the graveyard. The majority of the headstones are located S of the church, there are none to the N and few to the W. The graveyard appears to have cleaned up by a recent graveyard restoration scheme. In the OS Letters the church is mistakenly described as a 19th-century church with nothing surviving of the original church (O’Flanagan 1930, vol.1, 152). 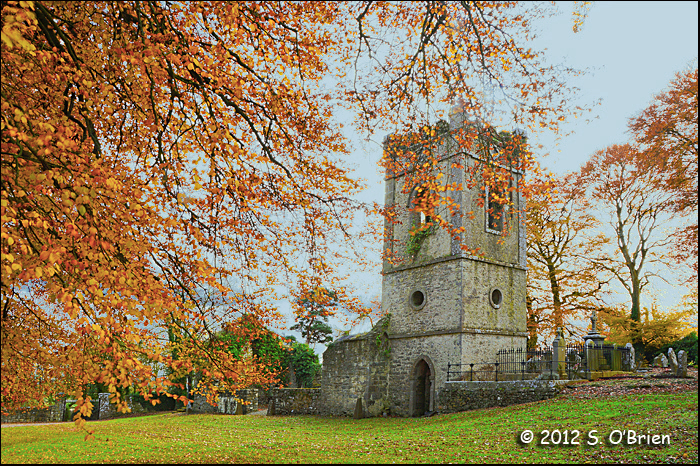 The old Catholic Church in Lismolin was dedicated to St. John the Baptist. In “Calender of Documents”, Survey Year 1302-07 on Taxation of Parishes, Lismolin is mentioned. In “Visitations of Archbishop O Hedian” Lismolin is mentioned as a Parish in 1437. Some time after it became the property of the Cistercians of Hoare Abbey, Cashel.

Tradition states that Cromwell destroyed the church in Lismolin. Canon O’Rourke wrote that on 11th July 1704 Fr Wm. Kelly (72 years old) was the registered PP of Ballingarry, Crohane and Lismolin. He livid in Gragaugh and is buried in Lismolin. Fr Kelly was the victim of special persecution at the hands of Baron Butler of Lismolin. He often sought refuge with his sister, Mrs Croke, at Ballingarry. When Fr Kelly died, six Croke boys carried his coffin to Lismolin graveyard at night time.The location of his grave is unknown. At present the graveyard is still in use and the vestry walls and gable wall of the Protestant Church are still standing. Inside are two stone slabs to the memory of Scott brothers from Scotsborough. The church was built around 1716 on the site of the Catholic Church.

In 1846 the Lord Lieutenant gave permission for the parishioners of Lismolin to abandon their church and to build a new one at Crohane. Their church had become very dilapidated and they did not like the climb up the hill. So they left and attended the newly built church in Crohane around 1848. In 1811 the parishes of Lismolin. Modeshill and Mowney (in Ballingarry) were joined with Crohane. Lismolin was the parish church.

In 1840 J. O ’D’s Field Notes said that “No part of the original church remained and the site was occupied by a Protestant church still in use. 80 yards south is a square earthen fort. One furlong N.W of the church is a square castle”. It was owned by the Butlers. They had left some years previous to 1840 as they had acquired Mount Juliet by marriage.The Lismolin Butler estate was sold about 1850. One mile from Lismolin lived Maria Butler in Wilford House (now called The Bishop’s House). Maria Butler was related to the Lismolin Butlers. In 1787 Bishop John Butler detached himself from the Catholic Church and married Maria. She was 23 years old and he was 57.They had one malformed baby who died soon after birth. Some time later they separated. Maria remarried soon afterwards. She married John Moore from Portumna.They had one son Hubert Butler Moore and a grandson called Butler Dunboyne Moore, one of whose descendants was Sir Claude Auchinlech of Co. Fermanagh. He was Field Marshal and Chief of Staff to General Montgomery during World War II.

Articles written about Lismolin relate that after the Battle of Kinsale 1601, the Ulstermen on their way home camped in a field near Lismolin. One of the O’Neill’s died there. Williamite armies came there en-route from Waterford to Limerick in 1691 with their siege train that Sarsfield destroyed in Ballyneety. They occupied and fortified Lismolin Castle.